16 photos
Claire Tomlinson neé Claire Janet Lucas 1944 - 2022.
Claire Tomlinson the daughter of Ethel and Lascelles Arthur Lucas, who founded Woolmers Park Polo Club in 1949, and was instrumental in the revival of polo in England after the Second World War.
Claire became one of polo's few true masters of the number one position and the first woman in the world to rise to five goals in 1986. She swept away the rule forbidding women in British high-goal polo and became the first to compete on equal terms with men at the top tier. She was the first woman to win the County Cup (1972) and the Queen's Cup (1979), having fought for her participation after the Hurlingham Polo Association repeatedly denied her entry to the high-goal tournaments, although her handicap was higher than of many other male participants in the Queen's and Gold Cup. She still holds the women's high-goal handicap record today.
Claire Tomlinson along with her husband Simon re-established the Beaufort Polo Club in 1989 at their home Down Farm in Gloucestershire. In 1993, she instigated and set up a coaching system with Hugh Dawnay, for the H.P.A. from scratch, which has had a profound effect on how players are taught.
She also taught the Duke of Cambridge and Prince Harry to play polo.
She has been successfully breeding polo ponies since the 1970s and is pro-active with the modern breeding programme presently in operation, which includes Beaufort Embryo Transfer.
Categories & Keywords
Category:People
Subcategory:Women
Subcategory Detail:
Keywords:Beaufort Polo Club, Claire Lucas, Claire Tomlinson, Down Farm, Los Locos, female, lady polo player, polo player, sportsperson, women in polo
© Polophoto 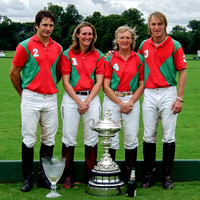